On Feb. 14, at 1:30 PM in Berger Center, Music at Oakmont is proud to present one of the top string quartets, both in the US and internationally. Returning for their second concert in Oakmont, the Dover has chosen a most attractive program: the Dvorak Op. 105 (played here only once, in 2009) and the Schubert D. 887 (never before heard in Oakmont). 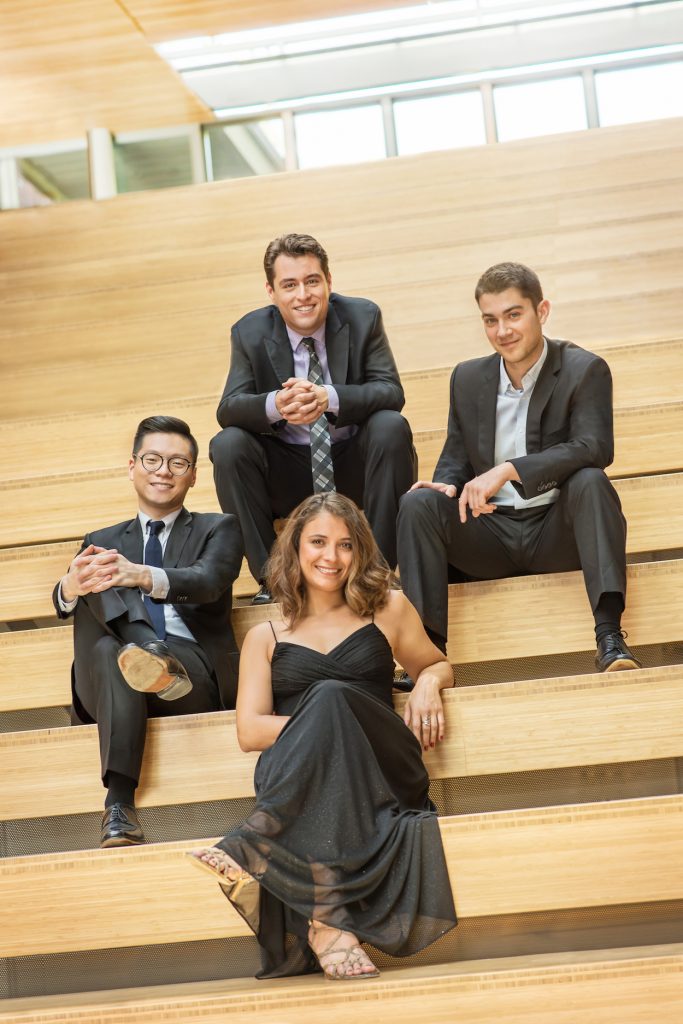 Here’s what the Chicago Tribune has to say about this ensemble: “The Dover Quartet players have it in them to become the next Guarneri String Quartet—they’re that good.” The Quartet’s rise from up-and-coming young ensemble to a spot at the peak of their profession has been “practically meteoric” (Strings). With its burnished warmth, incisive rhythms, and natural phrasing, the Dover’s distinctive sound has helped confirm its status as “the young American string quartet of the moment” (New Yorker). The group is currently serving as quartet-in-residence at the Bienen School of Music at Northwestern University.

In the spring of 2016 the Dover Quartet was recognized with the Hunt Family Award, one of the inaugural Lincoln Center Emerging Artist Awards, and in past years has taken top prizes at the Fischoff Competition and the Wigmore Hall International String Quartet Competition. All four quartet members are consummate solo artists: first violinist Joel Link took first prize at the Menuhin Competition; violinist Bryan Lee and violist Milena Pajaro-van de Stadt have appeared as soloists with the Philadelphia Orchestra and Tokyo Philharmonic, respectively; and cellist Camden Shaw released a solo album debut on the Unipheye Music label.

In October 2017 Cedille Records released the quartet’s sophomore album, entitled Voices of Defiance: 1943, 1944, 1945. The recording takes listeners on a powerful journey through works written during World War II by Viktor Ullmann, Dimitri Shostakovich, and Simon Laks. The 2016-17 season saw the release of the Dover’s all-Mozart debut recording on the Cedille label, a nod to the 1965 debut album of the Guarneri Quartet, whose founding violist, the late Michael Tree, joined the Dover Quartet on the recording.

The members of the Dover Quartet studied at the Curtis Institute of Music, where the group was formed, and Rice University’s Shepherd School of Music, later serving residencies at both schools. Their name pays tribute to Dover Beach, written by fellow Curtis alumnus Samuel Barber.

The Quartet is dedicated to sharing its music with under-served communities and is actively involved with Music for Food, an initiative enabling musicians to raise resources and awareness in the fight against hunger.

ADMISSION: $20, or your season pass, at the door