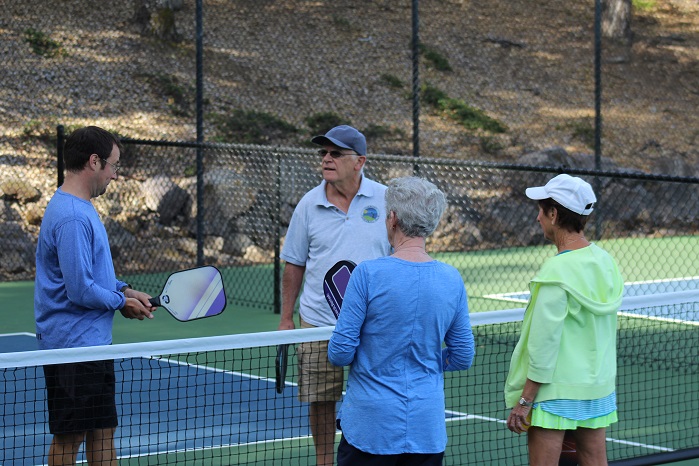 Lessons with Adam is off to an enthusiastic start. Nineteen club members are taking the first series of classes. Diane Naylor is taking one of the classes said, “What was great about the lessons is that Adam asks you in advance via email for specific parts of the game that you want to work on so we have a plan going in.” They worked on the skills they needed to improve their game. The next series of classes will begin October 10th with sign ups beginning on October 2nd.

The dink is one of the most effective shots in pickleball. The main purpose of the dink is to keep your opponents from gaining or keeping an offensive advantage. The dink is a soft shot that is hit just hard enough to clear the net, but not so hard as to allow your opponent to aggressively volley the ball.

If you don’t have a chance at a strong offensive shot, then chances are good that the best shot selection is the dink. That is especially true if both of your opponents are at the net (at the no-volley line, which is the strongest position in pickleball). If one of your opponents is back at the baseline, don’t use a dink in that situation unless you are pretty sure that he/she won’t be able to get to the ball. A dink in that situation will just bring your opponent up to the net, which is where he wants to be. If he is at the baseline, keep him on the defense with a deep shot hit with pace.

The keys to effective dink play are patience and precision. It takes patience to keep dinking and to resist the urge to try to create an offensive shot when none is available. Move your opponents around with a variety of shot placements including a crosscourt shot at an angle. You want to maneuver the opponents enough so they make the first mistake, either by hitting the net or hitting it high enough to give you an offensive shot. It takes precision on your part to not make that first mistake. That takes practice to hit the ball with just the right amount of touch. Practice the dink while you are warming up.

Master the dink. It is likely that your opponent has not!

Mark your calendars now – next club meeting will be Friday, November 16th at 3pm at the Berger.

EQUIPMENT: Balls are provided. Loaner paddles are available for introduction and coached play. These balls and paddles are for use only on the Oakmont Pickleball courts. WEBSITE: https://oakmontpickleball.shutterfly.com

All Oakmont residents are welcome.