Marlena Cannon Tremont
In a wide-ranging discussion that spanned concerns from the safety of Oakmont to the long-range future of the Los Guilicos homeless camp, about 250 people spent two hours asking questions of Jack Tibbbetts, executive director of St. Vincent de Paul during an open meeting at the Berger Center. 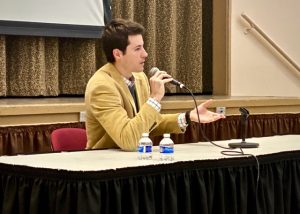 Jack Tibbetts of St. Vincent de Paul responds to a question at the Berger Center. (Photo by Julie Kiil)

“We are in a Perfect Storm,” Tibbetts said. “What is happening across the street is the result of years of unintended consequences and underinvestment coming to a head.”
The Jan. 28 open session was the second held at the Berger since the county decided to move 60 homeless people from a site west of Santa Rosa.

Tibbetts, who is also a city councilman, confided that he was surprised and sorry that the Los Guilicos site had been selected so quickly, but said he was glad St. Vincent de Paul had been chosen to oversee the project. “ I think that this service is important to the entire county and it is how we start providing some dignified sheltered solutions to people who are ready and it’s part of a larger county plan,“ he said. 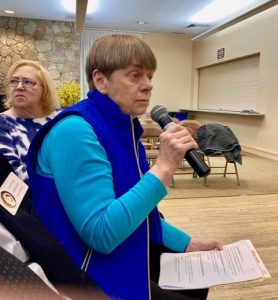 That plan, Tibbetts said, is to provide “permanent supportive housing” to all of the homeless over the next few years. Although Los Guilicos is seen as a 90-day bridge, Tibbetts readily admitted that “county decision-makers could make a decision for another 90 days.” Going beyond that, he said, is not legally allowed because the fire marshal has ruled that structures older than six months are permanent housing and require built-in sprinklers.
As of the meeting, about 20 of the 60 temporary living structures had been filled. Filling them was slowed, in part, because homeless along the Joe Rodota Trail west of Santa Rosa believe they would be moved to “an internment camp,” Tibbetts said.
Many people had questions about the rules governing what Tibbetts calls the Village — rules he said were changed based on input from Oakmont and the Valley of the Moon Children’s Center. It is now an imperative, Tibbetts said, that people cannot come and go at will. Instead, they must leave on a shuttle bus that operates between 9 a.m. and 7 p.m., stopping first at the corner of Farmers Lane and Highway 12. There are no stops in or near Oakmont. 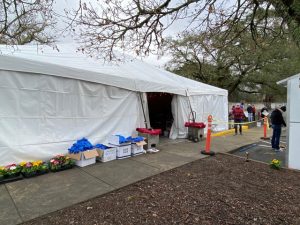 To address fire concerns, Tibbetts said there are no flammable or combustible liquids allowed in the camp except a propane tank for the water heater for the showers. That tank will be locked and checked on a regular basis by security guards. Although smoking is allowed, it is confined to a spaces surrounded by hardscapes.
There were many questions about security. Tibbetts said several layers are in place:
*Residents have been screened.
* Two security guards from the company D Block Security will patrol 24/7.
* Juvenile Probation has a security team.
* The county has employed a community services officer.
To ensure that people do not leave the village on foot, other protocols are in place that Tibbetts believes will “mitigate those scenarios from happening.”

Sign made by Oakmonters to greet arrivals at Los Guilicos. (Photo by Julie Kiil)

In addition, he said background checks for St. Vincent de Paul employees are mandatory.
A white Jeep with an orange light on top and a D Block logo on the side will also circulate through Oakmont from 9 a.m. to 3 p.m. Tibbetts also promised to work with the OVA and the county to look into obtaining cameras at Oakmont entrances. Further, he asked Oakmont residents to be his eyes and ears and call his cell phone (707-495-7438) if something seems wrong.
Many people referred in their questions to something they had read on Nextdoor or other social media, asking Tibbetts why he didn’t have 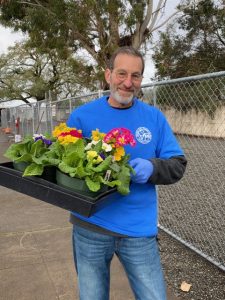 someone who could respond to and correct inaccurate accounts. His laughing reply was that he would  “have to hire two or three people full-time to just do that.”
Tibbetts concluded philosophically on how the policy decisions of governments over the past years have impacted homelessness. After years of working in this environment, he said, “I’ve concluded that if you’ve got nothing to lose, there is no incentive to abide by the common social order and rules. These villages give people something to lose.” 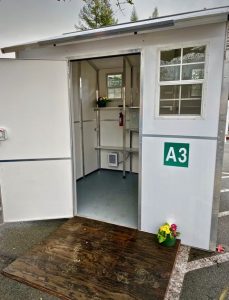 Primroses at door and inside to welcome arrivals at Los Guilicos. (Photo by Julie Kiil)