More than 500 residents from Oakmont and neighboring communities packed the Berger Center Jan. 17 to hear details about a temporary sanctioned homeless camp in the Los Guilicos complex less than a half mile from Oakmont’s doorway. 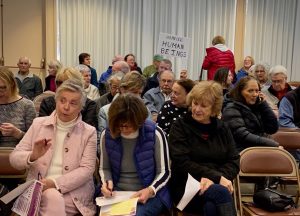 “You, like I, are not happy with the decision or the planning process,” County Supervisor Susan Gorin told the crowd, including several city and county elected officials and staffers, police and congressional staff. “This is the time to ask questions to the operator and the county,” she said.

Gorin was the lone “no” vote when the supervisors approved the relocation of up to 60 persons from the Joe Rodato Trail encampment west of Santa Rosa that has been declared an emergency health and safety crisis.

The Guilicos site will be operated under contract by St. Vincent DePaul (SVDP). Jack Tibbetts, 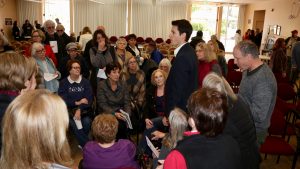 executive director of SVDP and a city councilman, said he “believes in this model. I’m excited to be the person directing this and who is accountable to you. I feel a huge sense of responsibility for the success of this site. If this fails, I’m going to take this as my failure. If this succeeds, this is going to be our shared success.”

The people relocating to Los Guilicos will have been screened by a care management team and deemed the most vulnerable. Tibbetts said. All will move voluntarily. They are individuals over the age of 60, victims of domestic violence or sexual abuse, people with medical challenges that require shelter, or people in treatment for drug or alcohol abuse. Of the first 30 selected transferees, who were to move in by Sunday, Jan. 26, 68% are women.

In a prepared presentation, Tibbetts said the vision is a model for permanent supportive housing that he considers the gold standard. 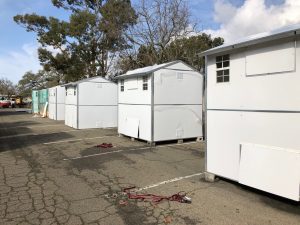 Individuals will get prefabricated tiny homes with light, heat and a bed. There will be set meal times, check-in and check-out procedures, a 7 p.m. to 7 a.m. curfew and a ban on drugs, alcohol and weapons.

An hourly shuttle bus will take residents to work, shopping, medical appointments or county services. There will be a central services area with showers and toilets, a place for games, TV, classes and workshops and individual storage for personal belongings. Residents will be offered employment to keep the campsite clean.

Christopher Godley, director of Sonoma County Emergency Management, said the county is examining long-term solutions to the homeless crisis. “We’re not just shifting the camp, we’re building a village,” he said. “The intent is not to warehouse people but to bring them into an opportunity where they can move back into society.”

He said the camp would be surrounded by an 8-foot high fence with a privacy screen. There will be 24/7 security inside the village, enhanced external security on the campus and a coordinated effort with the Santa Rosa Police, the Sonoma County sheriff’s office, the parks departments and the California Highway Patrol. Tibbetts also said he would be working with OVA to determine what is needed to meet security concerns among residents and, if necessary, will ask the county to increase the project budget.

Over the next few days, St. Vincent de Paul employees will be canvassing Oakmont, particularly 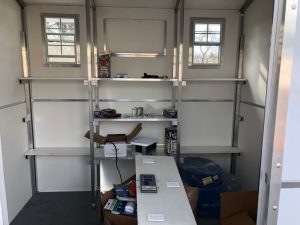 in neighborhoods around Pythian Road, to explain the plan, their services and ways to contact them over the coming weeks. They also planned on forming an advisory council that would include Oakmont residents.

An outside company, Leap Solutions, was hired by the county to facilitate the meeting and manage the over 200 questions from the audience which were submitted in writing, rather than taken from the floor, a constraint that frustrated many.

Tibbetts addressed fire concerns by stating there would be no open flames, fire extinguishers throughout the site and that a plan was being developed in conjunction with the Fire Department.

Many of the questions expressed anger about the site selection process, the lack of notice or a meeting for resident input ahead of the decision and the uncertainty of the April 30date for the end of the housing at Los Gallinicos.

Gorin said her “severest criticism” was about the planning process for the relocation. “We will have time for input before the next choice,” she said.

Tibbetts, who gave his personal contact information to the crowd, stayed behind at the close, talking with numerous individuals about their concerns and the final question from the audience, “How can Oakmont help?”

The construction of the tiny homes was expected to be completed by Jan. 20, with residents relocating to them by the end of January. 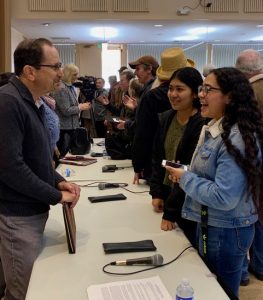