While a proposal to build an Oakmont dog park near the Community Garden on Stonebridge Road appears to be gaining momentum, the estimated cost of $283,000 may turn out to be a roadblock.

Both the location and costs were explored at a board workshop Oct. 2 at Berger Center. While the board cannot take any action at workshops, several directors expressed reservations about spending up to $295,000 on a dog park. Estimated costs vary from $213,000 to $295,000 depending on which of three possible locations is chosen. Directors Heidi Klyn and Carolyn Bettencourt were absent.

Pat Olive, president of the Oakmont Community Garden Board, said in a written statement to the board that “a dog park should not be allowed anywhere near” the garden. “Any dog park on the west side of the garden,” she wrote, “has the high potential to prove a health risk to gardeners by contaminating the garden and its produce and should not be allowed.”
However, after a lengthy workshop discussion of possible steps to mitigate the health risks, including controlling any water runoff from a dog park by changing the grade of the site and the use of a berm or swale, Garden Club board members softened their position.

Olive told the Oakmont News, “If we can be assured that 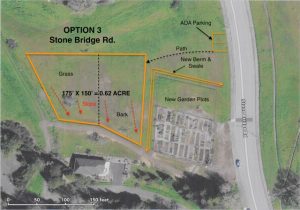 the garden is totally safe,” the Garden Club would drop its opposition. Shirley Phillips, a garden board member, said the key issue is: “Would proper mitigation keep the garden safe?” She called for independent experts to answer that question.

Board president Steve Spanier told the Oakmont News that a committee representing the Dog Park Committee and the Community Garden has been formed to resolve safety issues. “What we need to do is alleviate concerns of the garden people,” he said. In addition to a berm and/or swale, he added, metal may be driven into the ground. He said the OVA board won’t vote in October, but there is “a high likelihood” that the Stonebridge Road property will be the site for the dog park if it can be made safe.

Steve Huntley, who has a degree in environmental toxicology and operates a consulting firm, concluded after a detailed discussion of how feces and urine could affect the area near the garden, that they are not a major issue for the dog park.

The two-hour workshop opened with a discussion of three possible sites: on Stonebridge Road, a plot behind Berger Center near the Petanque courts, and a site near the 4thtee of the east golf course. The site is adjacent to the Quail Inn Parking lot.

The discussion focused on the Stonebridge site after Iris Harrell, chair of the Building Construction Committee, listed problems with the other two. The plot near the Petanque courts, she said, is too close to the pool, has a house nearby and would cause a parking problem. She said there’s not enough parking in the area now, especially during special events.

The first problem with the golf course site, Harrell said, is whether the golf course would sell it. In addition, she said a 30- to 40-foot high screen would be needed to protect dog owners and their pets from golf balls and raises an aesthetic issue and she doubts it would pass a City of Santa Rosa design review. She added that it would have to be ADA compliant, posing additional problems.

Not only is the Stonebridge site owned by OVA, Harrell said, but there is adequate parking on both sides of Stonebridge Road and there is only a 3 percent slope toward the gardens, which could easily be made level with the gardens.

When asked by board president Steve Spanier where the directors stand, Director Marianne Neufeld asked:  “How do we fit $300,000 into the budget?” Treasurer Elke Strunka, noting that the Triones have pledged $25,000 toward construction of a dog park, said fund balances would have to be reduced by $275,000 or there could be a dues increase.

Spanier said that while OVA has little surplus funds, he reminded everyone that at last Spring’s candidates forum prior to the April election, all nine candidates said they favored a dog park. He said he considered that “a campaign promise.” He added that if dog owners formed a club, it would be the largest or one of the largest in Oakmont.

Director Tom Kendrick said that while he thought the $290,000 cost estimate could be reduced, all the estimates “seem a little expensive for a dog park.”

Director Al Medeiros called the dog park “a nice amenity” and said the Stonebridge site was the most attractive. “If it’s a good thing for Oakmont, we can afford it,” he said. “Today I don’t know if it’s a good thing.”

Director Goodwin noted that Oakmont’s primary purpose is to provide recreational facilities, adding that the estimate of 1,000 dogs in Oakmont “blows my mind.” However he quickly added that he wants “more information.”