Plans to put six pickleball courts at the East Rec Center  were approved by Santa Rosa on April 19, capping a long site battle that will save Oakmont at least $250,000. The board hopes to approve a contract for under $42,659 to convert the courts at the East Rec this week.Conversion of the lower tennis courts for pickleblall could be completed in two-to-three weeks once the approval is final, OVA manager Kevin Hubred said.  Opponents have 10 days to appeal the decision.

“There’s going to be pickleball in Oakmont, and the East Rec courts are found to be the best location for the least amount of money,” said Iris Harrell, who shepherded the project along with board director Greg Goodwin. She said overall cost will be at least $250,000 less than the OVA  would have spent for the four-courts that had been approved near the Berger Center.  “And that’s a lot.” 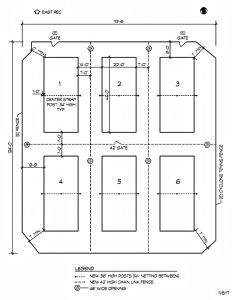 Santa Rosa zoning administrator Andy Gustafson, in granting the conditional use permit following an hour-long hearing, said games must be played with so-called quiet paddles and balls and cannot begin before 7 a.m. or go later than 8:30 p.m. No night lights will be allowed.

The approval came almost exactly a year after construction of courts on the meadow between the OVA office and the Central swimming pool was halted by the then-new board President Ellen Leznik less than two days after it began. The controversial decision to begin construction right before a board election likely contributed to the election of a new board majority in 2017.

Ultimately OVA paid the contract $15,000 for his work and $12,000 in lost income.
“I think the (pickleball) controversy is about over,” said Harrell, who chairs Oakmont’s Building Construction committee.

Goodwin said planning and gaining approval for the East Rec project was a group effort.  “I’m just happy with the outcome,” he said. “It’s a compromise. We still have tennis courts and now we have pickleball. I just have my fingers crossed that there will be no appeals.”
The project includes drilling holes to place corner posts for the nets, covering up the existing court lines, striping new ones, adding divider fences, some repairs to the court services, and the restoration of the upper courts to a tennis only area.