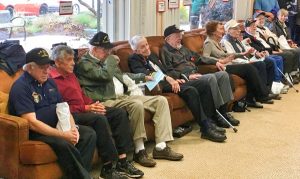 Update: $30,000 collected during Friday’s event at the Berger Center.

Persistent rain could not dampen the enthusiastic turnout of Oakmont residents at the Berger Center on Friday to honor our veterans and the emergency first responders who contributed to the safety and wellbeing of Oakmonters and the protection of the community. Co-sponsored by the Oakmont Kiwanis Club, OVA and Oakmont Gardens, the event was introduced by Kiwanis President Charlie Ensley with a flag ceremony performed by Boy Scout Troop 55 of Santa Rosa and the Pledge of Allegiance. 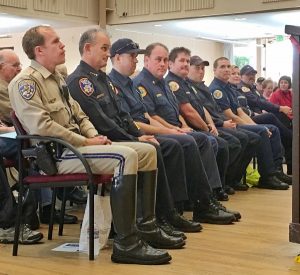 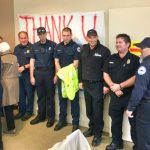 Veterans from all branches of the armed services were then asked to stand as groups in succession and received spirited applause from the audience. Mr. Cobb concluded his remarks by noting that this was the 13th annual Veterans Day celebration in Oakmont. In so doing, he acknowledged the late Captain Mel Ruiz for starting the annual tribute to veterans. His widow Kathy was in attendance and was asked to stand, with appreciation expressed in applause. 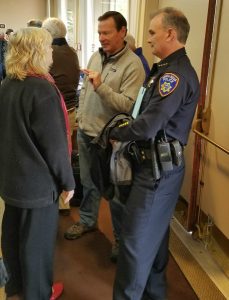 OVA Board President Gloria Young gave an emotional and 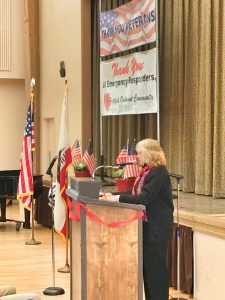 heartwarming speech in thanking and listing all the various groups of first responders by name. In addition, she recognized all who supported them, both government officials and private citizens. And she warmly acknowledged Barry Lloyd, the Helicopter Program Manager for Cal Fire, and invited him to say a few words.

Cal Fire, he noted, has the largest free-standing aerial firefighting force in the world, comprising 52 dedicated aircraft and over 160 aviation professionals. In addition, over 70 helicopters were brought in to fight these fires from as far away as Colorado and Montana, many flown by active duty and military veteran pilots. He also mentioned that 8500 people in Cal Fire worked on the fires. 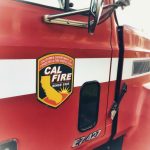 In concluding her remarks, Young said, “We express our love and our deepest gratitude to all those who rise to the call of heroism.”

Event organizer Pat Amedeo said her efforts and those of her team were “a labor of love.” She then 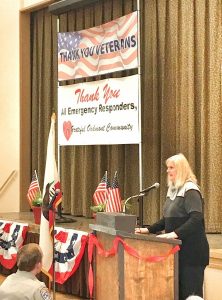 introduced Supervisor Susan Gorin, who lost her Oakmont home in the fire. In spite of her loss, she graciously addressed her thanks to all the firefighters and first responders for their “stellar” and “incredible” efforts. To her husband she has said, “Honey, just pretend we are newlyweds, we’re starting over.” She added that they have decided to rebuild on their lot and were even meeting with an architect that very afternoon.

Please keep the contributions coming to the Oakmont Community Foundation (memo:Wildfire). At Friday’s event an additional $30,000 in contributions was collected. Over $72,000 has been contributed so far and all contributions will be bundled and distributed to victims of the fire. The fundraising will continue until just before Thanksgiving and checks can be mailed to or dropped off at the OVA Office. 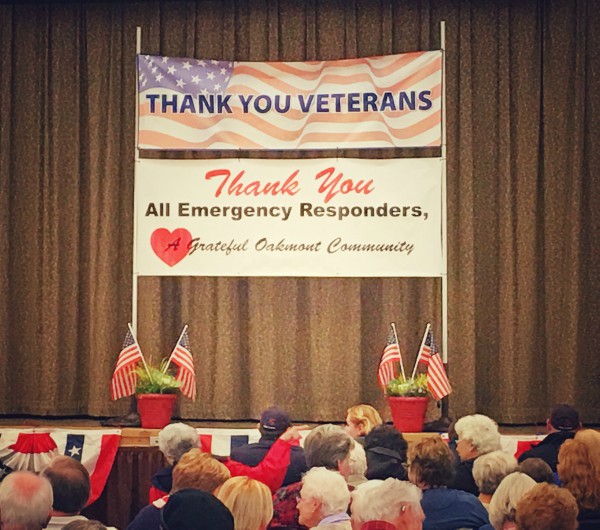