Despite setbacks from the weeklong fire evacuation, the new operators of Oakmont’s golf facilities are moving ahead with restoring and improving golf and dining facilities.

“We’re extremely excited about the future,” said Mike Sharp, president and CEO of CourseCo, which began a lease operation of Oakmont’s golf courses Oct. 1. “We look forward to quickly seeing some changes, some enhancements and some improvements. And hopefully soon returning to a robust, vibrant facility with lots of activity.” 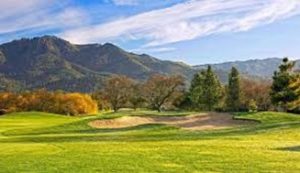 Sharp spoke at an online town hall meeting on Oct. 6 where some 50 participants viewed or took part in the 90-minute discussion. The golf courses both reopened the same day after being closed during the evacuation. “We’re slowly getting back open,” Sharp said.

Despite the enthusiasm, there was not much in the way of solid detail. “We understand that for the next several weeks – months we’re gonna have some challenges that we will have to navigate together,” Sharp said. “We ask that the community be patient with us, but know that we will be accessible, forthright and we really are proud and excited to be your partner.”

* Courseco has $200,000 worth of new equipment ordered and on the way as part of a planned $1 million investment of its own money.

* The focus for the next three months will be on improvements on the golf courses and finishing the restaurant renovation that is underway.

*  The new operators are working on a plan for non-golfing residents to walk on the courses. “We understand the need and desire of residents to have access,” said Tom Bugbee, CourseCo’s chief operating officer.

*  Renovation of the club restaurant is expected to be completed by the end of October, but an opening will be delayed by restrictions imposed under Santa Rosa Covid-19 regulations.

* CourseCo is working with OVA on fire remediation as part of an overall OVA effort throughout the community. “It’s fair to say we feel a renewed urgency to all matters related to fire remediation,” OVA Board President Steve Spanier said in response to a viewer’s question.

Sharp promised more town golf town halls in the future and urged residents to follow golf developments by signing up for emails by going to the CourseCo Valley of the Moon website at www.playvom.com.