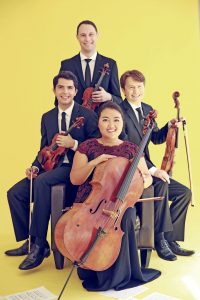 As 2018 comes to an end, we would like to wish our Music at Oakmont audience a wonderful holiday season, and to alert you to the two beautiful concerts that await you next month. It will be a joyous January indeed, thanks to a quirk in scheduling. As you will remember, our October 2017 appearance by the Calidore String Quartet had to be cancelled because of the wildfires, and the only date in the foreseeable future that fit the Quartet’s availability was Jan. 31, 2019. And Music at Oakmont had already engaged cellist Edward Arron and pianist Jeewon Park for our January slot, on Jan. 10.

So we will enjoy two fabulous concerts just three weeks apart! Edward Arron and Jeewon Park return to Oakmont for their third appearance, and have chosen a particularly attractive program for their visit. They will open with Beethoven’s Twelve Variations on “See the Conqu’ring Hero Comes,” from Handel’s Judas Maccabaeus, followed by Manuel de Falla’s Suite popular española, a set of Spanish folk songs. Then, in gracious response to our request for Ms. Park to perform a solo work, we will hear Chopin’s beautiful Ballade No. 1, Op. 23. After the intermission, Mr. Arron and Ms. Park will again join forces, in Brahms’ beloved Sonata in F Major, Op. 99. 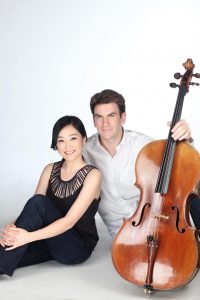 The 2018-19 season marks Edward Arron’s tenth anniversary as artistic director of the Musical Masterworks concert series in Old Lyme, Connecticut. He is also the artistic director of the Festival Series in Beaufort SC and co-artistic director with Ms. Park of the Performing Artists in Residence series at the Clark Art Institute in Williamstown MA. Mr. Arron has performed numerous times at Carnegie’s Weill and Zankel Halls, Lincoln Center’s Alice Tully and Avery Fisher Halls, New York’s Town Hall and the 92nd Street Y, as well as at Bargemusic. Festival appearances include Ravinia, Salzburg, Mostly Mozart, Bravo!Vail, Tanglewood, Spoleto USA, and Bard Music Festival. In 2016 he joined the faculty at University of Massachusetts Amherst.

As a recitalist, soloist with orchestra, and chamber musician, Jeewon Park has appeared in major concert halls across North America, Europe and Asia. Recently she performed as soloist in the inaugural festival of the IBK Chamber Hall at the Seoul Arts Center, as well as at venues including the Metropolitan Museum of Art, Tilles Center, Vilar Performing Arts Center, and Kumho Art Hall. Ms. Park returns regularly to the Caramoor International Music Festival where she first appeared as a Rising Star in 2007, and is a frequent performer at Bargemusic in New York.

Watch for more information about the Calidore String Quartet’s Jan. 31 concert in the next issues of Oakmont News. Here’s a tantalizing teaser: their program will be all Beethoven, and will include two of the master’s works never before heard in Oakmont!

PRESS RELEASE NO. 1, FOR CONCERT FEB. 13, 2020 –Rosemary Waller A FABULOUS VIOLIN AND GUITAR DUO On Feb. 13 Music at Oakmont welcomes the

Nigel Armstrong at Music in Oakmont

Rosemary Waller We learned recently that, due to unforeseen circumstances, the distinguished Israeli pianist Einav Yarden, an Oakmont favorite, will be unable to appear as

Rosemary Waller Thursday April 11 is a special red-letter day for Music at Oakmont: it has taken us three years to book this exciting rising

Rosemary Waller It has been almost three years since my associate, Judy Walker, called my attention to a brilliant young pianist named George Li. After