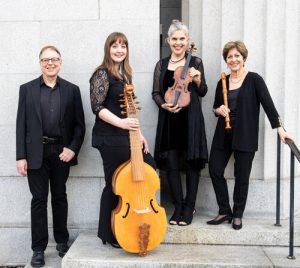 This event has already happened.

On Friday June 3 at 1:30 p.m. in Berger Center, Music at Oakmont is delighted to welcome back the highly-praised Baroque music ensemble Musica Pacifica. The group will present a fascinating program entitled “Hijinks of the High Baroque,” and will feature recorders, violin, viola da gamba and harpsichord.

Here is how Musica Pacifica describes their upcoming appearance: “Diving into the ultra-fashionable High Baroque scene of mid-18th century Europe, we explore the works of composers who struggled with keeping their composure throughout their careers. Come hear a program of quirky and appealing music along with the stories that shed light on the often-crazy lives of composers such as Veracini and Leclair–whose compositions belie their darker sides. The program includes a seldom-heard violin sonata by the ‘unstable genius’ Veracini; an unusual trio for violin, viola da gamba and keyboard by Purcell; a virtuosic recorder sonata by Handel; a flamboyant harpsichord piece by the French composer Royer; a haunting chaconne by Rameau; and an elegant trio sonata by Leclair, all framed by two of Telemann’s delightful Paris Quartets replete with their own musical hijinks.”

Described by American Record Guide as “some of the finest Baroque musicians in America,” Musica Pacifica has performed on some of the most prestigious concert series in the US, as well as festivals in Germany and Austria, and on German National Radio, NPR’s “Performance Today,” and Minnesota Public Radio. The group’s eight CD releases on the Virgin Classics, Dorian, and Solimar labels have won national and international awards.

Music at Oakmont’s 2022-23 season roster has just been finalized–look for it in this issue of the Oakmont News. You will find a listing of the fabulous musicians who will perform next season, which runs from October through May. Copies will be available at the June 3 concert, and season passes will be available to purchase.

Once again, Music at Oakmont is most grateful to the Oakmont Community Foundation for partnering in our 2022 Donor Drive, now in progress. Donor envelopes and information will be available at the June 3 concert. Checks should be made out to Oakmont Community Foundation, with “Music at Oakmont” on the memo line, and may be brought to the June 3 concert, or mailed to OCF at 6637 Oakmont Drive, Santa Rosa CA 95409. Donations are welcome in any amount, since admissions cover, at best, only about 50% of concert costs. The staff of Music at Oakmont is entirely volunteer.

Please note: For the safety and comfort of our audience, proof of vaccination is required. While masks are no longer mandatory, they are strongly preferred. If you attended any of our November, December, March, April, or May concerts, you are already logged in, and you will just need to state your name at the door.