Oooooh What A Night X 2 by Sandra Pessner, Oakmont Dems Board

In a June 2018 Oakmont Democrats meeting, we discussed how and where we could utilize our best talents to make a difference in the critical upcoming election. With Board members Tom Amato, Chris Thompson, Ida Egli, Sandra Pessner, and many others, we decided to focus on the Central Valley! Our main goal was to back Josh Harder for Congress.

With tremendous amounts of Oakmont and Sonoma County support, we created a fundraiser for Harder who faced an uphill battle against incumbent Jeff Denham. 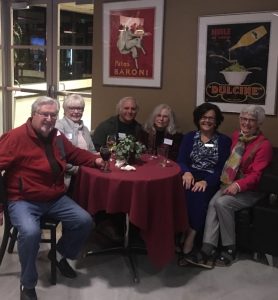 As a retired teacher in Modesto, I knew firsthand that Denham was a Trump pal who needed to be stopped. The dedicated Oakmont Dems Board and members took the lead to honor and support Harder with hearts and wallets wide open. With tremendous support and thanks from Oakmonters and State Senator Mike McGuire who “worked the Berger” encouraging all to donate, those hearts and wallets sprung open for Harder! Over $26,OOO was raised! With a tight race, Josh Harder was elected after the deadline, winning by 4%! We should ALL be proud of this dedicated successful team effort!

On February 22nd, our Oakmont Dems’ Harder Team was invited to be recognized and honored by Congressman Mike Thompson for turning CD10 from red to BLUE! Oooooh what a night that was!!!

The Oakmont Dems are very appreciative to ALL who worked HARD for Harder!!! Please be a member now, join now to make a difference!!!!!

The Campaign for a Local Fair Wage

Oakmont Democrats and Oakmont Progressives on April 3 at the West Rec Center at 6:30 PM, will present a special program on the issue of increasing minimum wage in Santa Rosa. North Bay Jobs with Justice and the Alliance for A Just Recovery have initiated a regional campaign to implement $15 an hour citywide minimum wage laws (phasing in by 2020 three years earlier than the state) in six cities in the North Bay including Novato, Sonoma, Petaluma, Sebastopol, Santa Rosa, and Cotati.

The proposed legislation will raise wages for approximately 25,000 workers in Santa Rosa. This program will provide an overview of the campaign and information about how Santa Rosa residents can become involved. Presenters will include Julie Combs, Santa Rosa City Council, Maria Garcia, Lead Organizer, and Marty Bennett, Co-Chair, North Bay Jobs with Justice.