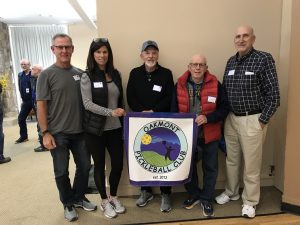 The quarterly Oakmont Pickleball Club meeting was held on April 4th at the Berger Center. The newly installed President, Fred Merrill, came to the meeting with his new gavel, well prepared and determined to conduct it in an hour duration. The membership chair, Maggie Schmidt, was the first to report that the current membership is 151, with more anticipated in future months (see attached picture of new members). A well prepared presentation by Vice President, Diane Naylor, brought out the most enthusiasm on the possibility of purchasing a portable backboard as a training aid. The members unanimously approve of this purchase. Snacks were made available by the Social Committee (where was the punch?). Vicki Owens prepared a written sheet on upcoming events which are as follows:

Linda Schilling, the club secretary, brought to the members attention the fact that Shuttlerfly wasn’t being utilized by the members as a form of club communication. This was very amusing since it was reported that most members either didn’t want to or didn’t know how to use the Shutterfly system. The possibility of utilizing g-mail as an alternative was open for discussion. It was decided to table the decision until further information is gathered. The meeting was concluded by asking club members to share their activities during the rainy season, which are as follows:

Jay Diment: worked on a lot of puzzles

Bill Wrightson – trips to the dentist

Everybody is looking forward to returning to the courts ASAP.

EQUIPMENT: Balls are provided. Loaner paddles are available for introduction and coached play. These balls and paddles are for use only on the Oakmont Pickleball Courts.