Pickleball: Installation of New Board Members 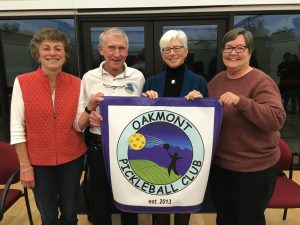 The Oakmont Pickleball Club held its meeting on 1/16/19, where it elected new board members (see attached photo). Departing President, Melissa Bowers, presented the names recommended by the selection committee who were unanimously voted in by attending members (most likely because nobody else wanted to be nominated!). Melissa, who served two terms as President, was delighted to install the new board members. Many thanks goes to Melissa, whose high energy level was instrumental in guiding us through challenging times in procuring our permanent courts. Following is the list of new board members:

* President: Fred Merrill moved to Oakmont about 2 years ago. He as an avid cycling and tennis enthusiast, in fact his wife calls him an “addicted physical junkie”. It was natural for him to explore the pickleball phenomena which he quickly added to his active lifestyle.

* Vice President: Diane Naylor is a retired physical therapist , who graciously will demonstrate proper body mechanics and warm up activities (when asked). She is retired, so don’t expect to receive any free courtside treatment.

* Treasurer: Victoria Dettman was introduced to pickleball by a friend. It is said that it is a perfect fit for her sore body (tennis abuse) and her Italian temperament. Be aware to avoid at all cost, getting her mad.

* Membership: Maggie Schmidt is instrumental in the tremendous popularity and growth in club membership. Her outgoing and positive personality along with her inclusive nature is a welcome addition to the board. Unfortunately, she was unavailable for the photo shoot, so a caricature is attached.

* Secretary: Linda Schilling has lived in Oakmont for the past 10 years. She recently took up the sport, although you wouldn’t know it, since she has tremendously improved her skills in a short period of time. Her attitude is reflected by , “if I can do it, anyone can”.

Reminder: Membership renewal is now due. $20.00/each, which can be placed in the OPC Folder in the OVA office.

WHEN: New players (strictly beginners) Introduction to Pickleball and Coached Play (for beginners & novices), Tuesday from 10 – 11 a.m. These classes are combined during the winter schedule and are taught separately during spring, summer and fall.