SPOTLIGHT: FPUSA
The Federation of Pétanque USA (FPUSA) is the American affiliate of the Fédération Internationale de Pétanque et Jeu Provençal (FIPJP), the international governing body of the sport with over 600,000 members world-wide. The number of recreational pétanque players dwarfs official club membership, however, with an estimated 10-12 million players world-wide and over 50,000 players in the U.S. In addition to Europe, pétanque is particularly popular in Asia and its popularity is expanding rapidly in the United States, Canada, and the United Kingdom.

FPUSA is a non-profit federation of 52 affiliated clubs with 2200 members whose primary objectives are the growth, promotion, and organization of pétanque in the U.S. FPUSA clubs are divided into seven regions. Each region is represented by at least one Counselor, with representation proportional to regional membership.

Pétanque is exceptionally popular in Northern California, which is the smallest of the seven regions but has the greatest concentration of pétanque clubs. The Oakmont Pétanque Club, celebrating its 25th year in 2021, is a recreational club not affiliated with FPUSA, but several members are also members of nearby FPUSA clubs in Sonoma, Petaluma, and San Rafael. Since clubs sponsor both friendly play and open tournaments not requiring club or FPUSA membership in addition to FPUSA-sanctioned competitions, the opportunities for playing pétanque in Northern California are abundant.

PLAYING TIP: TAKE YOUR TIME
Playing pétanque is easy, but like most sports playing it well requires focus. By rule, a player whose turn it is to throw has one minute to do so. Alec Stone Sweet of FPUSA urges intentional use of that time. “Never point or shoot until you feel ready to do so,” Sweet advises, “get balanced and comfortable” in the circle, both physically and mentally. “If you miss a shot or play badly, step out of the round, take a deep breath; give yourself a chance to rethink what you are going to do.” Sweet agrees with the maxim that throwing too quickly will almost always yield sloppy play.

PÉTANQUE IN OAKMONT WEDNESDAY & SATURDAY
The Club encourages all Oakmonters who may be interested in playing or learning to play pétanque (pay-tonk’) to come to the courts (between Berger and the OVA offices beside the Shuffleboard courts) at 9:45 am on the Club play days of Wednesday and Saturday. We have boules to lend, the game is easy to learn, and you’ll be playing right away. Anyone interested, regardless of experience, is welcome to join in. No Club membership fees are required – just sign up to be on the Club roster. Club play days are casual friendly games with teams randomly assigned. The courts are also reserved 10 am – noon for Club player-arranged pickup games on Monday, Tuesday, Thursday and Friday.

Listen for the cracking of the tiles and yells of “mahjong!” 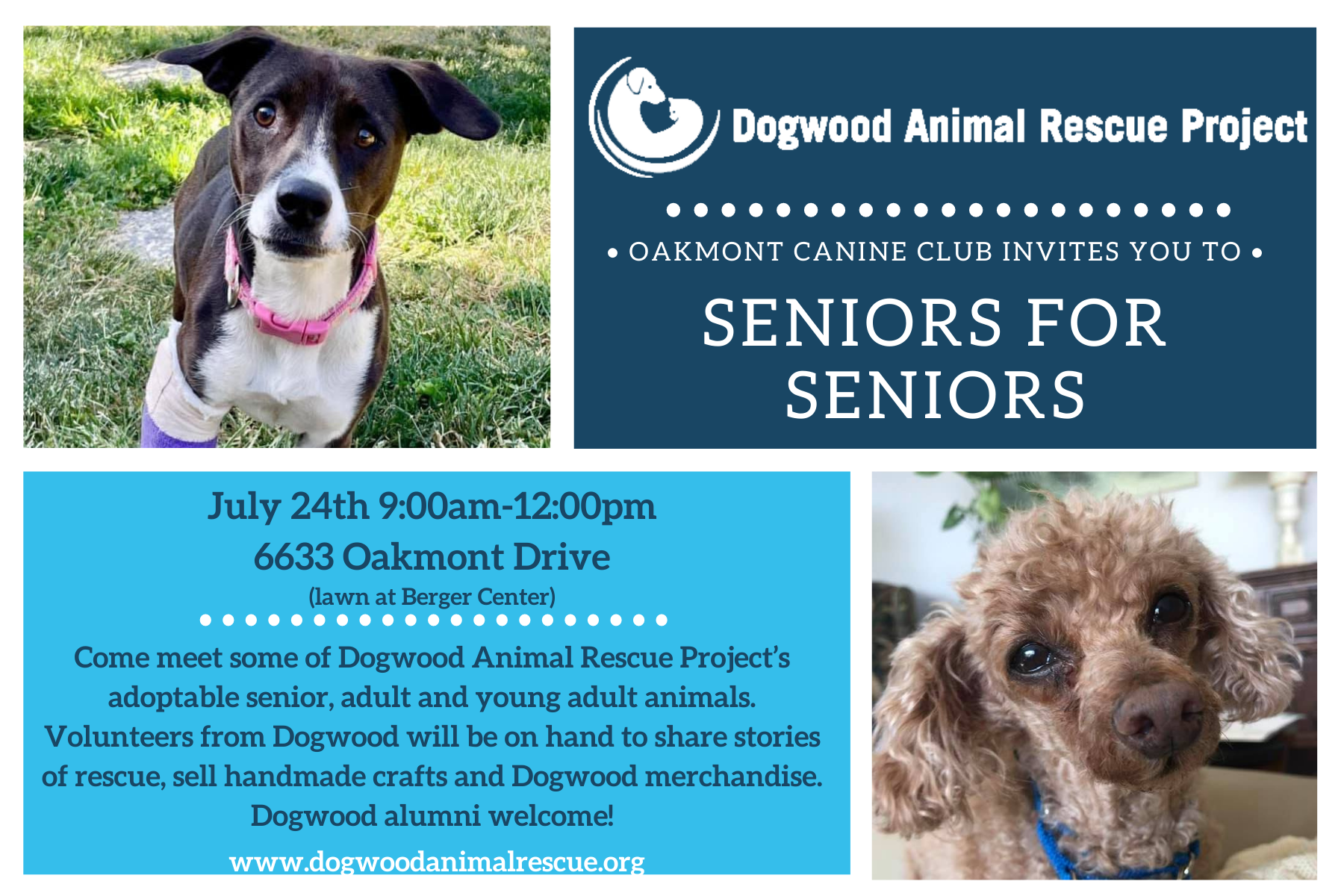 Save these Doggy Dates

Seniors for Seniors – Saturday July 24th – 9AM to Noon on the Berger lawn.
Older dogs make wonderful pets for seniors!