Playreaders meet every Monday from 2-3 pm in the Central Activity Center, Room B. Visitors are always welcome. Come early so that we can meet and greet you. 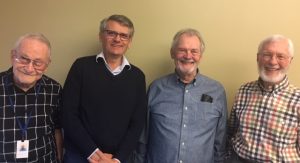 The comedy, set in Paris, raises questions about art and friendship among three friends, Serge, Marc, and Yvan. Serge, indulging his penchant for modern art, buys a large, expensive, completely white painting. Marc is horrified, and their relationship suffers considerable strain due to differences about what constitutes “art”. Yvan, caught in the middle of the conflict, tries to please both of them. The previously solid 15-year friendship is on shaky ground and Yvan’s attempts at peace-making backfire. As their arguments become more personal, they border on destroying their friendship.

Yasmin Reza (1959- ) is a French playwright, an actor, a novelist and a screenwriter. Her first play in 1987 Conversations after a Burial and second play Winter Crossing both won the Molière Award for Best Author.

In September 1997, she produced the first of her eight novels. Reza wrote the screenplay adaptation of God of Carnage for the 2011 Polanski film Carnage. She won a César Award for screenwriting and the film won a Little Gold Lion at the 68th Venice International Film Festival.

4000 Miles is a dramatic comedy involving Leo, who suffers a traumatic loss while he is on a cross-country bike trip. He seeks solace by visiting his feisty grandmother Vera Joseph, a no-nonsense 91-year-old member of the Communist Party. Leo’s girlfriend also arrives briefly

compounding his difficulties as she breaks up with him. Over the comfort of marijuana Leo and Vera share intimate life stories and find comfort and understanding.

Amy Herzog (1975- ) is an American playwright. Along with several early awards for emerging playwrights, Herzog also won the Lilly Award in 2011 for playwrighting, the , the New York Drama Critics’ Circle Award for Best Play for Mary Jane in 2018 and the 2019 Horton Foote Playwriting Award by the Dramatists Guild of America. Charles Isherwood, of the The New York Times, wrote: Herzog “…has emerged in the past few years as one of the bright theatrical lights of her generation.…”