Music at Oakmont is delighted to welcome back violinist Rachel Lee Priday on March 14, 2019. At her first appearance on this series Ms. Priday gained many new admirers for her elegant playing, beauty of tone, riveting stage presence, and “irresistible panache” (Chicago Tribune). She has appeared as soloist with major international orchestras, including the Chicago, St. Louis, Houston, Seattle, and National Symphony Orchestras, the Boston Pops, and the Staatskapelle Berlin. Combining a fierce intelligence with an imaginative curiosity, she is known for her wide-ranging repertoire and eclectic programming. 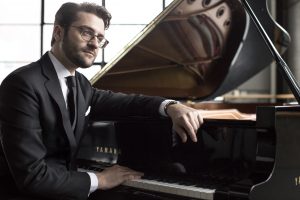 Recent and upcoming highlights of Ms. Priday’s touring schedule include concerto engagements with the Pacific Symphony, Bangor Symphony, Colorado Symphony, Santa Rosa Symphony, Rochester Philharmonic, Johannesburg Philharmonic, and Cape Town Philharmonic, performing with such conductors as JoAnn Falletta, Carl St. Clair, and Leon Botstein. Her frequent recital appearances have brought her to such distinguished venues as the Mostly Mozart Festival at Avery Fisher Hall, the Kansas City Harriman-Jewell Series, Ravinia’s Rising Stars Series, and UCSB’s Arts and Lectures, as well as the Louvre Museum in Paris and the Verbier Festival in Switzerland. Recent engagements include a debut UK concert tour, recitals at the Sarasota Opera House, Lawrence University, the Dame Myra Hess Memorial Series in Chicago, shows at Joe’s Pub and SubCulture in NYC, and an eight-recital tour of South Africa, as well as concerto appearances in Austria, Hong Kong, Singapore, Korea, and Russia.

Ms. Priday made her orchestral debut at the Aspen Music Festival in 1997 at the age of nine, and the following year performed at the 50th anniversary celebration of the Universal Declaration of Human Rights at the United Nations. A native of Chicago, she moved to New York in 1996 to study at The Juilliard School with Dorothy DeLay and Itzhak Perlman. She earned her B.A. in English from Harvard University and a Master of Music degree from the New England Conservatory, through its dual-degree program with Harvard.

David Kaplan will be Ms. Priday’s keyboard collaborator in her Oakmont appearance. The two artists have recently commissioned a new violin sonata from Pulitzer Prize finalist Christopher Cerrone. Mr. Kaplan has appeared as soloist with numerous orchestras, including the Britten Sinfonia at London’s Barbican Centre and the Berlin Symphony Orchestra at the Berlin Philharmonie. A creative recitalist, he has performed at the Ravinia Festival, Washington’s National Gallery, Strathmore in Baltimore, and the Chamber Music Society of Lincoln Center and Bargemusic in New York. He studied conducting in Berlin as recipient of a Fulbright Fellowship from 2008-10, and in 2014 earned his DMA degree from Yale University.

For their Oakmont appearance Ms. Priday and Mr. Kaplan have chosen a most attractive selection of sonatas by Beethoven, Janacek, and Richard Strauss.