YOU`LL BE DANCING IN YOUR SEAT 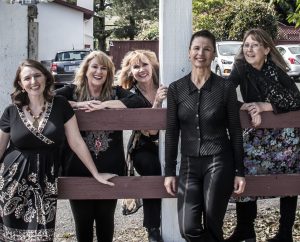 People who like to dance go to hear Foxes in the Henhouse at The Big Easy and the Red Brick in Petaluma, the Station House Café in Pt. Reyes, and the Redwood Café in Cotati. The Foxes are a big favorite at the Folkish Festival in Larkspur Landing every Sunday.

This is a great band. They won the Norbay Award for best acoustic folk band in 2013. Thanks to Rainbow Productions, we get to enjoy them here at Berger on Saturday, August 3rd at 7:00 P.M.

Before playing bluegrass in several bands, Alice Fitzwater (far right in photo) was a classically trained violinist. Now, she improvises with abandon for the Foxes. Lead singer Dorian Bartley (next to Alice) has a lush, throaty voice, plays bass for the Foxes, and also has her own vintage jazz, blues, and swing band. Pamela Joyce, second from left, plays guitar, mandolin, ukulele, banjo, harmonica, and washboard.

This sounds like fun. To get tickets, go to the OVA office and put a check in the Rainbow Women folder, $25 per ticket. Pick up your tickets at Will Call the night of the concert.

AND, THAT SAME NIGHT

The August 3rd concert has a very good opening act, too. Comedienne Mary Carouba played the Luther Burbank Center last month, has entertained audiences on Olivia cruises and Holland America ships, spoken at corporate events (Safeway), and even made Psychiatrists laugh at their convention. Her book, Women at Ground Zero, is in its 4th printing.

While promoting that book on CNN, Fox, MSNBC, in book stores and on college campuses, Mary discovered that she can make people laugh, which she will do here on August 3rd before the music starts. She`s working on a second book and writing a play. You will enjoy Mary, a comic version of a TED (Technology, Entertainment, and Design) talk.