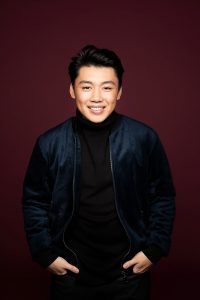 It has been almost three years since my associate, Judy Walker, called my attention to a brilliant young pianist named George Li. After listening to several of his stunning clips on YouTube I began inquiries about bringing him to Music at Oakmont. But his career was taking off at warp speed, and it has taken until now to find a mutually possible date, given both our schedule and Mr. Li’s. We are very excited to see this recital finally become a reality: Thursday April 11, at 1:30 PM, in Berger Center.

Since winning the Silver Medal at the 2015 International Tchaikovsky Competition, Mr. Li has rapidly established a major international reputation and performs regularly with some of the world’s leading orchestras and conductors. He gave his first public performance at Boston’s Steinway Hall at the age of ten, and in 20ll performed for President Obama in the White House at an event honoring Chancellor Angela Merkel. Mr. Li’s many prizes include the 2016 Avery Fisher Career Grant, the 2012 Gilmore Young Artist Award, and First Prize in the 2010 Young Concert Artists International Auditions. In 2018 he graduated from the Harvard University/New England Conservatory joint program.

In the 2018-19 season, he makes his debuts with the London Philharmonic, Montreal Symphony, Tokyo Symphony, and Royal Liverpool Philharmonic; embarks on an 11-city recital tour of China; and tours the US with the Russian National Orchestra and Mikhail Pletnev and Kirill Karabits.

Mr. Li is an exclusive Warner Classics recording artist. His debut recital album was released in October 2017, recorded live at the Mariinsky.

For his Music at Oakmont debut, he has chosen Beethoven’s Andante favori in F Major and “Waldstein” Sonata, followed by several selections by Liszt. For further details, as well as program notes, please visit our website www.musicatoakmont.org.