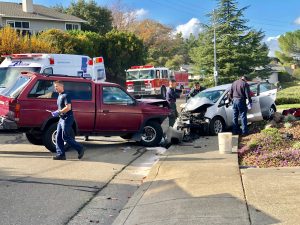 First responders assist injured people from their cars and investigate a Nov. 28 accident on Oakmont Drive. (Photo by Marty Thompson)

and closed Oakmont Drive for about an hour the afternoon of Wednesday, Nov 28.

The impact at 1:14 pm. sent the silver-color Kia into the yard at a home adjacent to the Oakmont Golf Club parking lot. Both vehicles had extensive front-end damage.

Investigating officer John Dedman described the truck driver’s injuries as major. Occupants of the hatchback had minor injuries, he said.

Dedman said both drivers said the other vehicle had entered their lane and that they tried to avoid a crash. Skid marks behind the red pickup in the northbound lane were straight, he said.

The injured, who were taken to Santa Rosa Memorial Hospital, were not identified by police.