The Petanque Club of Oakmont invites you to play the French game of Petanque. Petanque rules of play are similar to the Italian game of Bocce, in which players try to get closest to a small ball, the cochonnet (pallino in Bocce). Petanque is played on an open rather than a bordered court, is more a throwing game than a rolling game, and is played with smaller, metal ‘boules.’

Petanque is easy to learn, and we always have extra boules. It is not necessary to call anyone to say whether you are playing or not. Just show up at 9:45 a.m. on the designated Club play days of Wednesday and Saturday, when we divide into random teams and play. We will be delighted to introduce you to the game and if you enjoy it, joining the Club is easy – just sign up to be listed on the roster. No membership fees are required. The courts are also reserved for Club and open pick-up games on Monday, Tuesday, Thursday and Friday at 10 AM for those seeking additional play times. The Petanque courts are located in the Central Activities Complex next to the OVA maintenance building between the Berger Center and the OVA offices and you can park in the small lot off Oakmont Drive behind the Umpqua Bank. 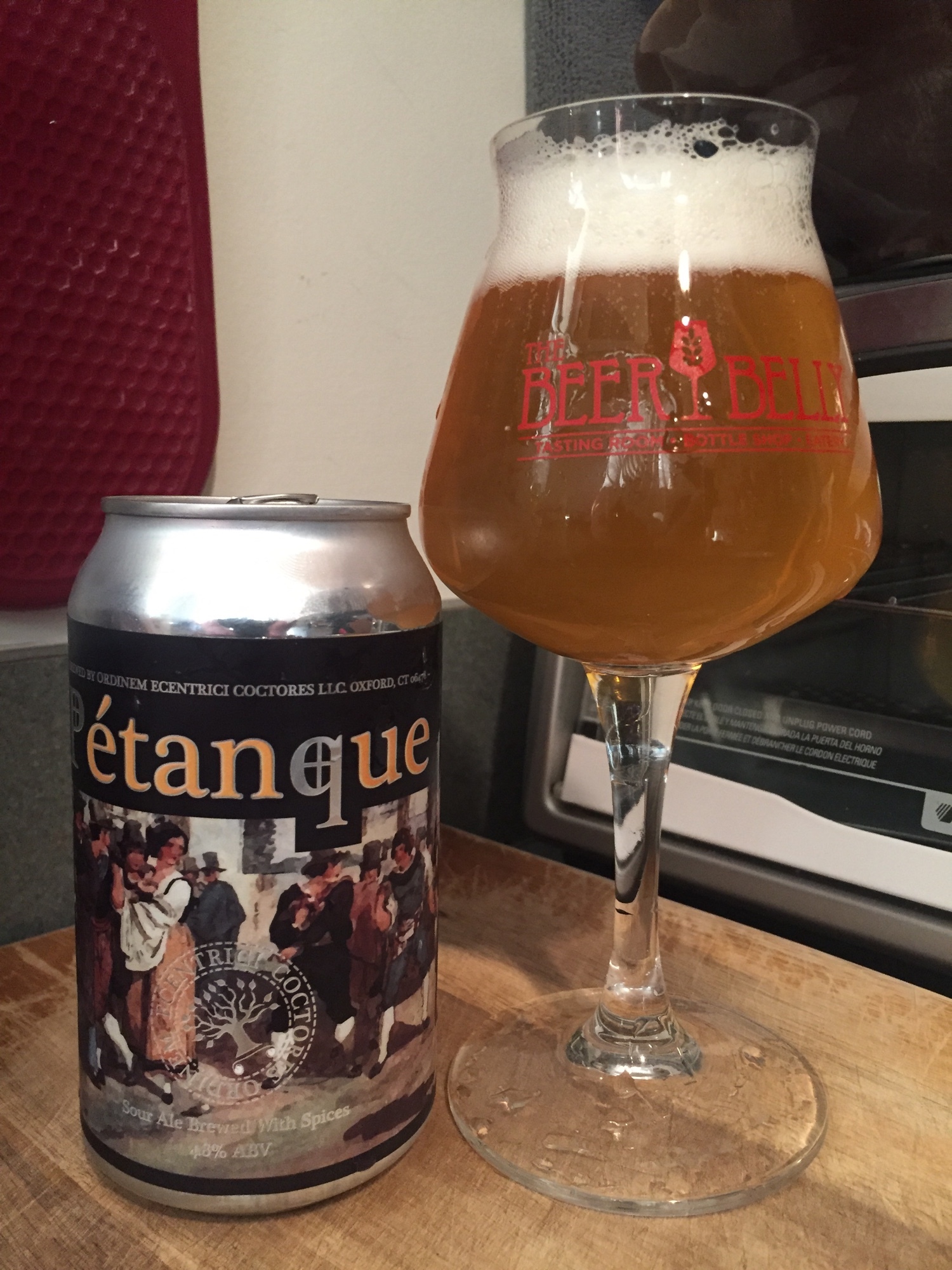 The annual Oktoberfest celebration, canceled in 2020 due to the pandemic, will kick off on Saturday, October 16, at 9:30 a.m. at the Pétanque Courts with registration for the Oktoberfest Tournament (melée format: randomly assigned teams). The Tournament, the club’s second of 2021, is limited by the capacity of the courts to the first 18 registrants.
Club member Jean-michel Poulnot is the tournament director who will handle registration and randomization of teams. Play begins at 9:45 a.m. Winning teams will be announced at the conclusion. A Potluck Lunch, to which all club members are invited whether playing or not, as well as their spouses/partners/companions, will begin at approximately 12 noon. 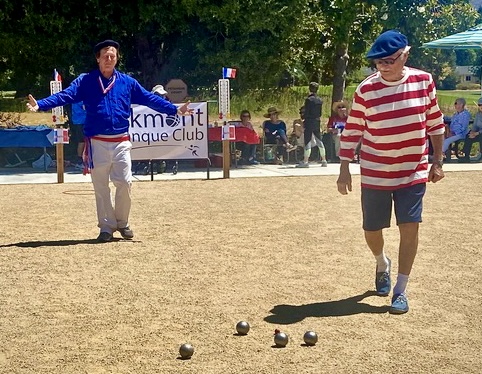 Playing pétanque is relatively inexpensive since the game requires just a set of three identically patterned boules. The Club has boules for lending to players new to the game. But at some point most players want to have their own boules, which are metal, sold in sets of three, and last for years. Boules are finished both in smooth surfaces and in various patterns so players can distinguish them. 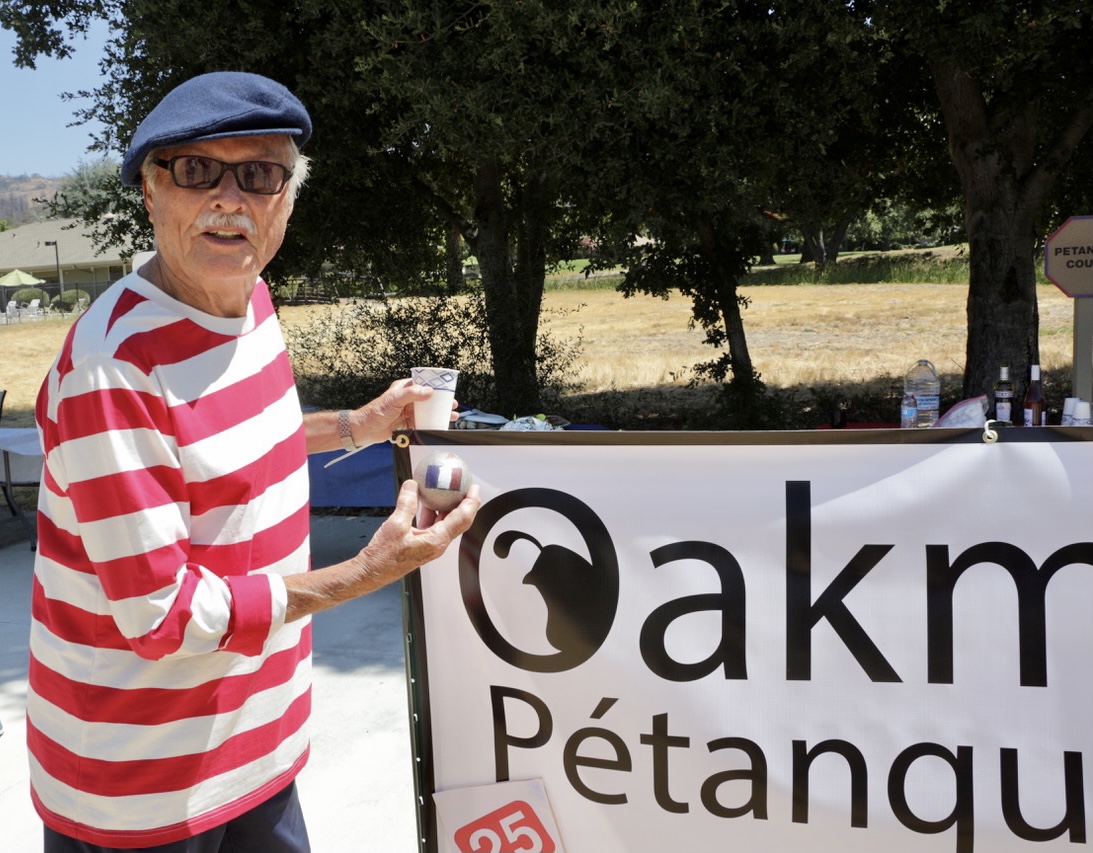 The Club has wrapped up a busy July and returned to regular Wednesday-Saturday play while looking forward to participating in OVA’s Join a Club Night on September 28 and to the next tournament, Oktoberfest, on Saturday, October 16. 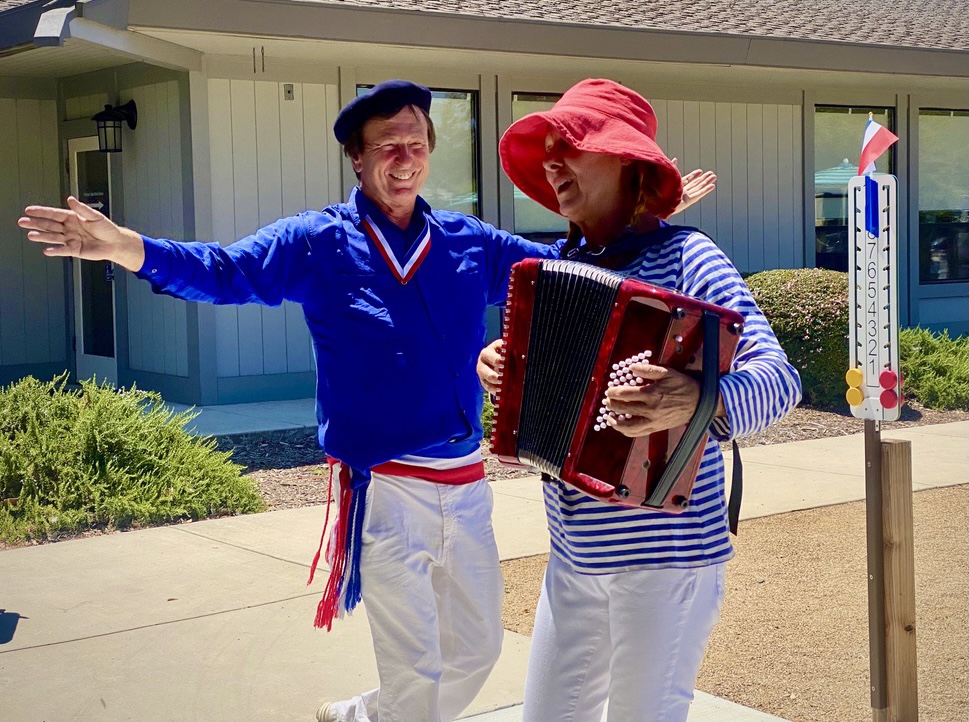 Jean-michel Poulnot, en béret and fully dressed for the part, led the assembly in his inimitable and always rousing rendition of La Marseillaise. During the potluck picnic lunch that followed, Debbie Knapp provided surprise entertainment, playing cabaret tunes on her accordion and musically transporting the pétancoeurs to the banks of the Seine. 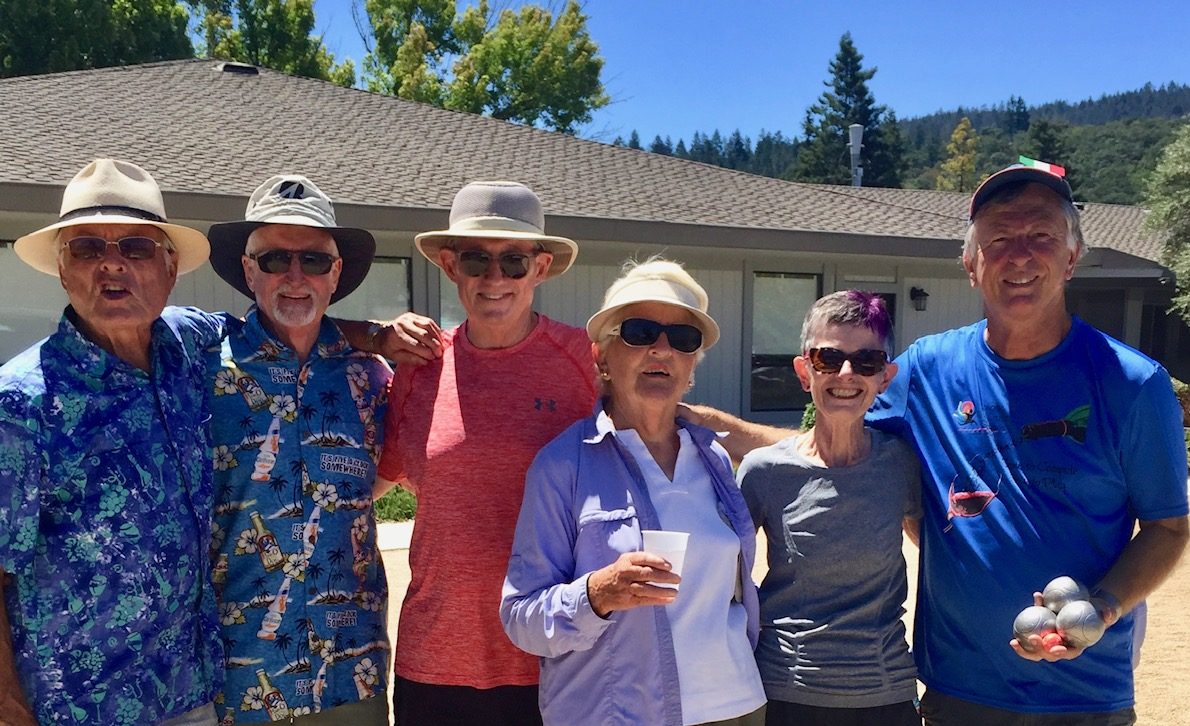 The Pétanque Club looks forward with great anticipation to sponsoring its first tournament of the year on Bastille Day, Wednesday, July 14. Registration begins at 9:30 a.m. 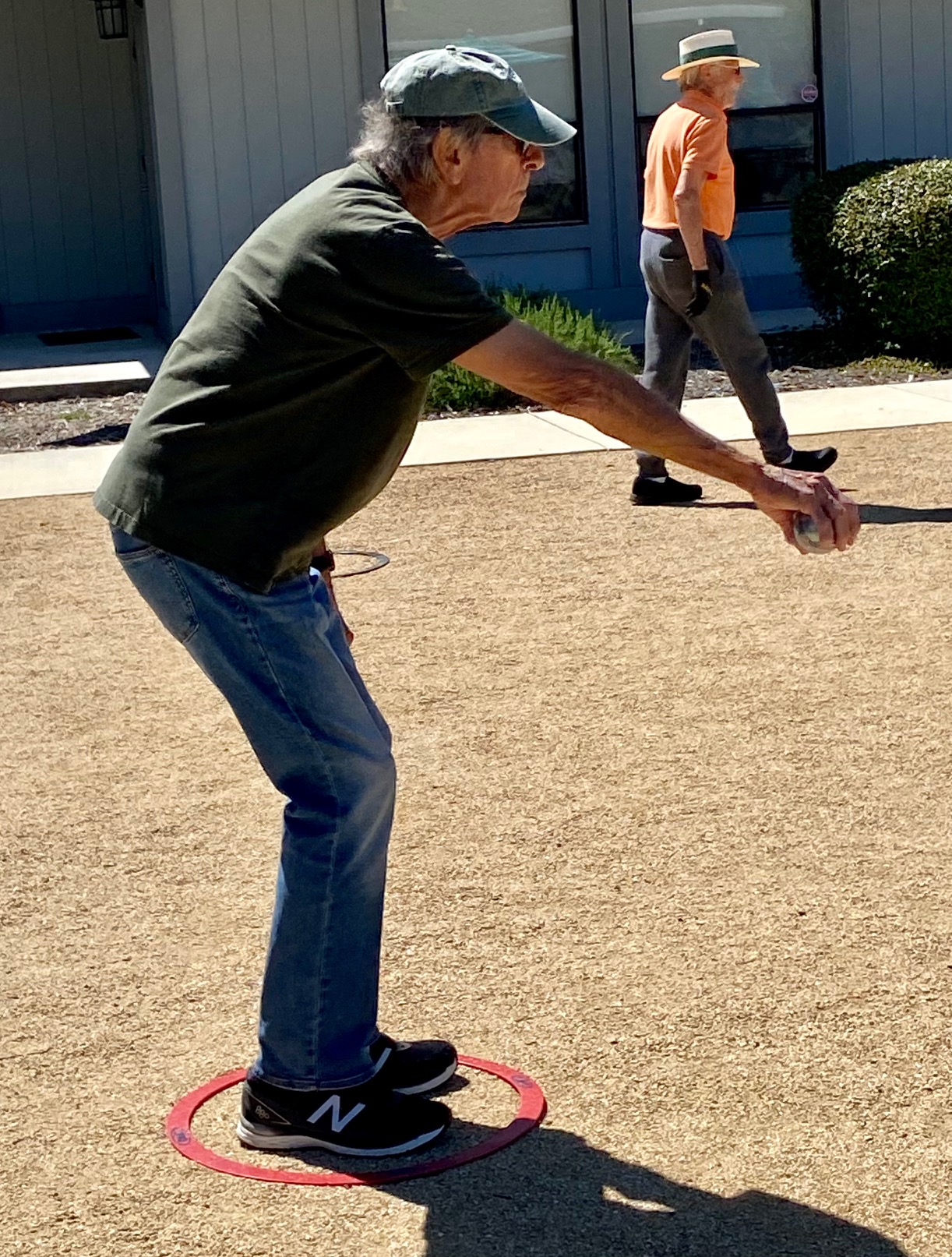 Playing pétanque is easy, but like most sports playing it well requires focus. By rule, a player whose turn it is to throw has one minute to do so. Alec Stone Sweet of FPUSA urges intentional use of that time. “Never point or shoot until you feel ready to do so,” Sweet advises, “get balanced and comfortable” in the circle, both physically and mentally. “If you miss a shot or play badly, step out of the round, take a deep breath; give yourself a chance to rethink what you are going to do.” Sweet agrees with the maxim that throwing too quickly will almost always yield sloppy play.

The Oakmont Pétanque Club is celebrating its 25th anniversary in 2021. 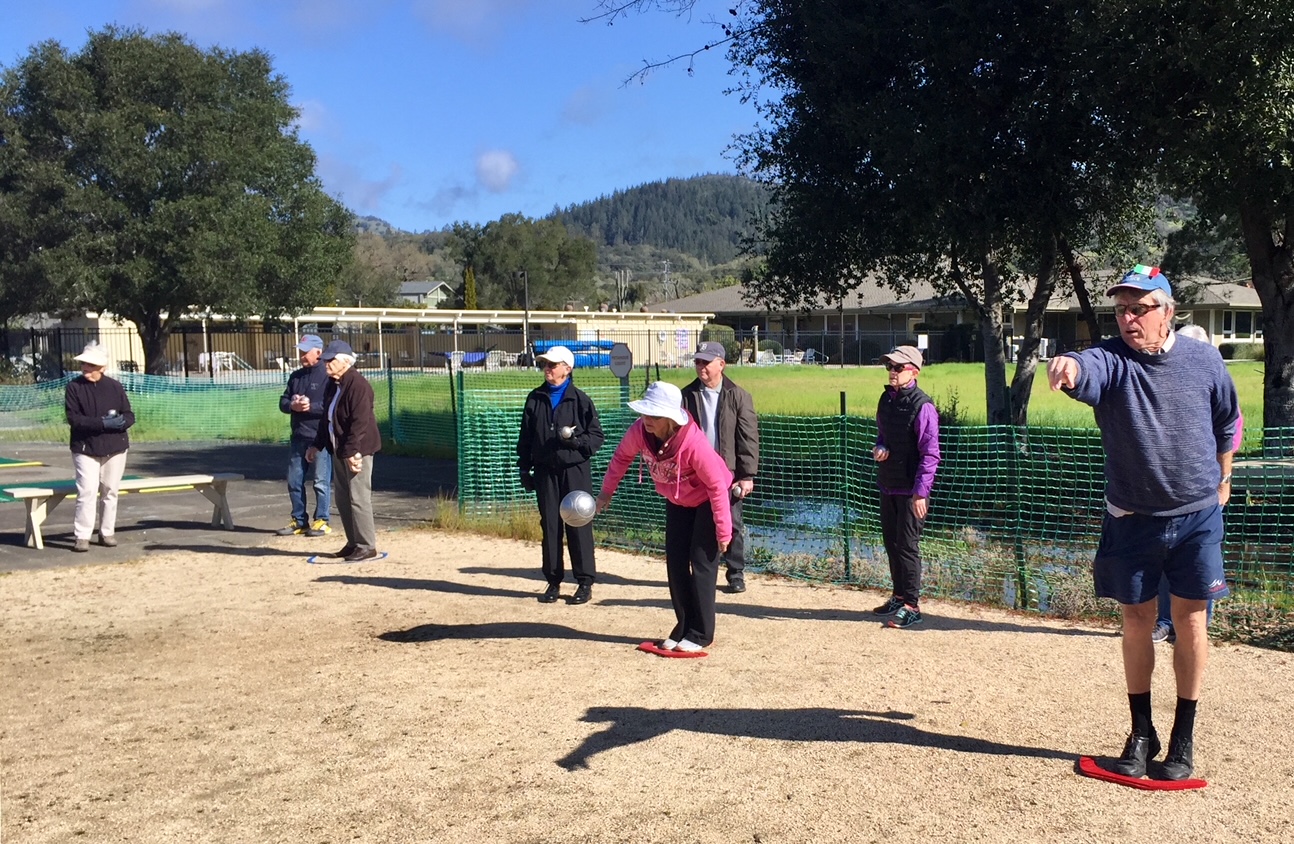 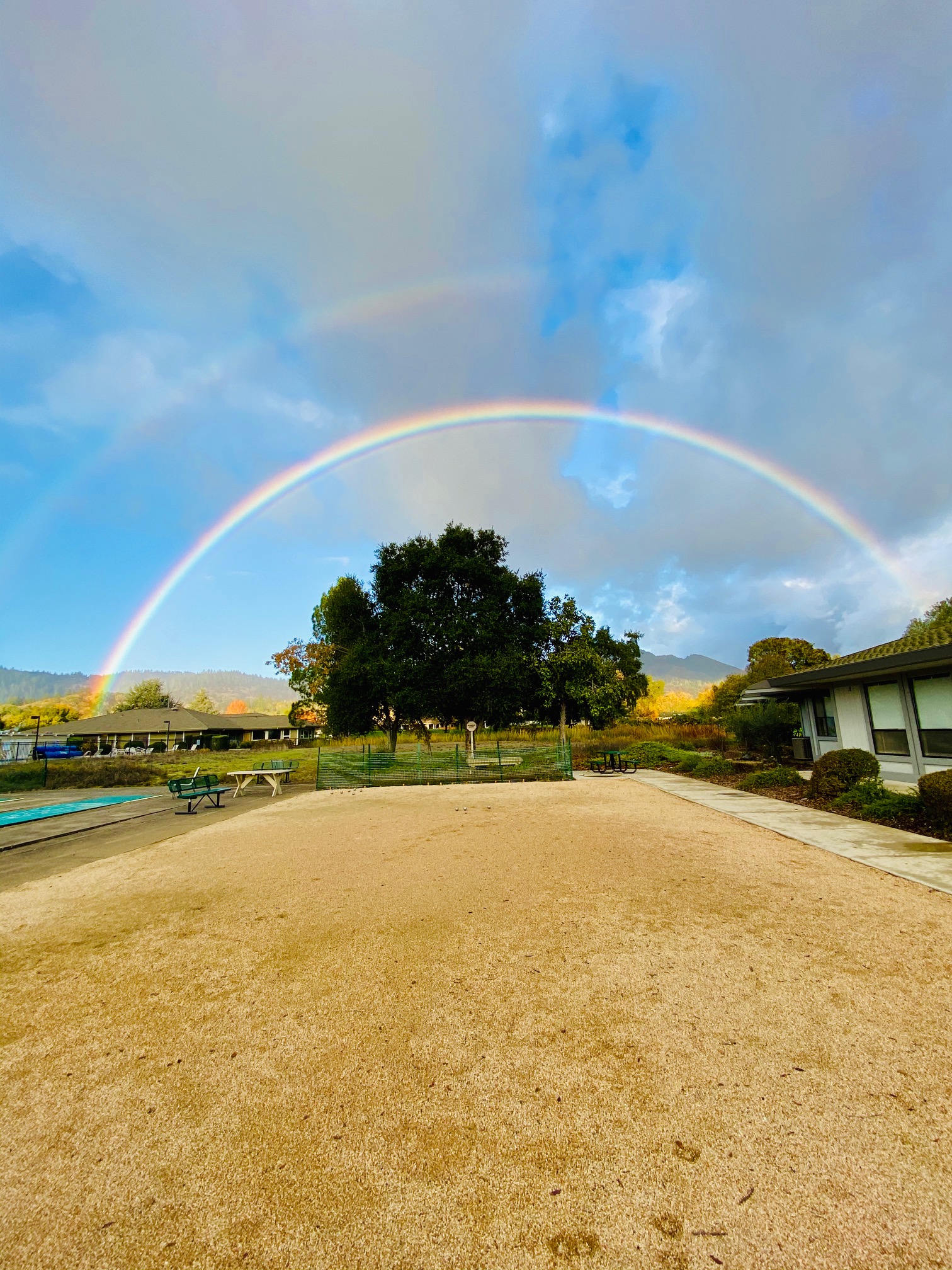 An interesting pétanque scoring quirk is “la malédiction” (the curse) of taking a 7-0 lead in a game. Remarkably often, a team leading 7-0 goes on to lose. 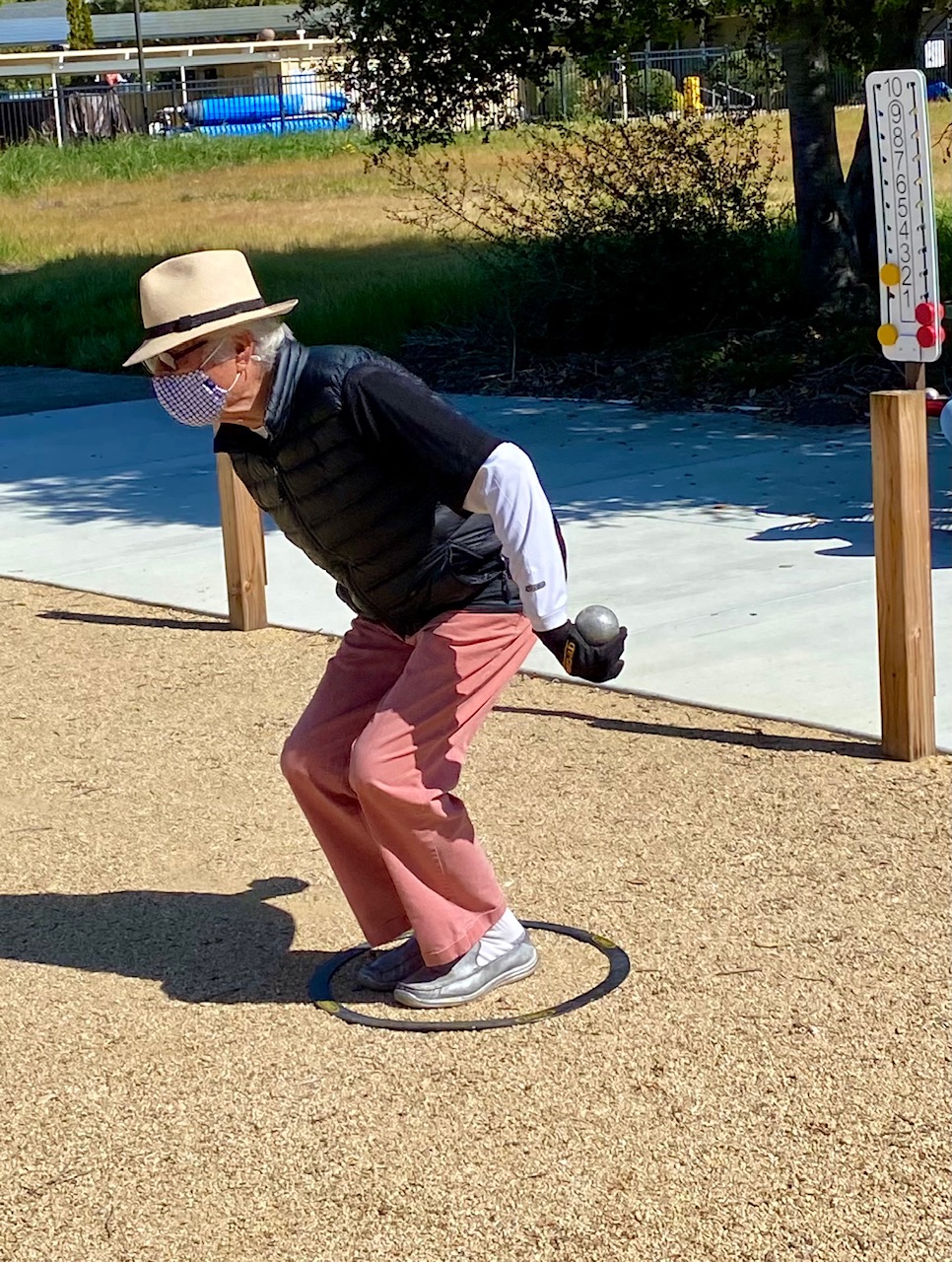 Regular Club play has returned on Wednesdays and Saturdays at 9:45 a.m. with Sonoma County’s movement to the Orange tier.

Pétanque England has awarded Mike Cubitt, Chairman of the Gravesend, Kent Pétanque Club and President of the Kent Pétanque League, its inaugural President’s Medal. The

PLAYING TIP: SLOW IT DOWNThe official Pétanque rules specify that a next throw must be made within a minute of the previous throw or completion

Boules being tossed on leisurely afternoons in Provençal village squares dotted with plane trees, or on gravel-patch streets in front of cafés bordered outside by

Awaiting play for an Inauguration Day pickup game. French expatriates brought pétanque with them when emigrating to the U.S. and Canada. In the early 1950s

At the highest levels of national and international competition, where pétanque is regarded more as semi-professional sport than leisure game, official efforts continue to introduce

ALL ABOUT BOULES With the gift-giving season at hand, popular blogsite All About Petanque (petanque.wordpress.com) recently announced that Pétanque America (petanqueamerica.com) is once again selling

CURRENT RULES FOR PLAY Pétanque play via player-arranged pickup games continues on the Oakmont courts between Berger and the OVA offices/Umpqua Bank. Using the two

Don McPherson LEARNING PÉTANQUE Pétanque, the French game of boules, is a fun, social game popular worldwide that people of all skill and physical ability

Don McPherson LEARNING PÉTANQUE Pétanque is a fun, social game popular world-wide that people of all skill and physical ability levels can play. If you’re

Don McPherson LEARNING PÉTANQUE Pétanque is a fun, social game that takes minutes to learn . . . “and a lifetime to master!” If you’re

This section does not have any updates, please stay tuned.